Location, location, location may be the real estate agents’ mantra, but it is also becoming critically important in determining the economic fate for the American worker. Regrettably, the recovery from the Great Financial Crisis has been incredibly uneven for a wide swath of our country. 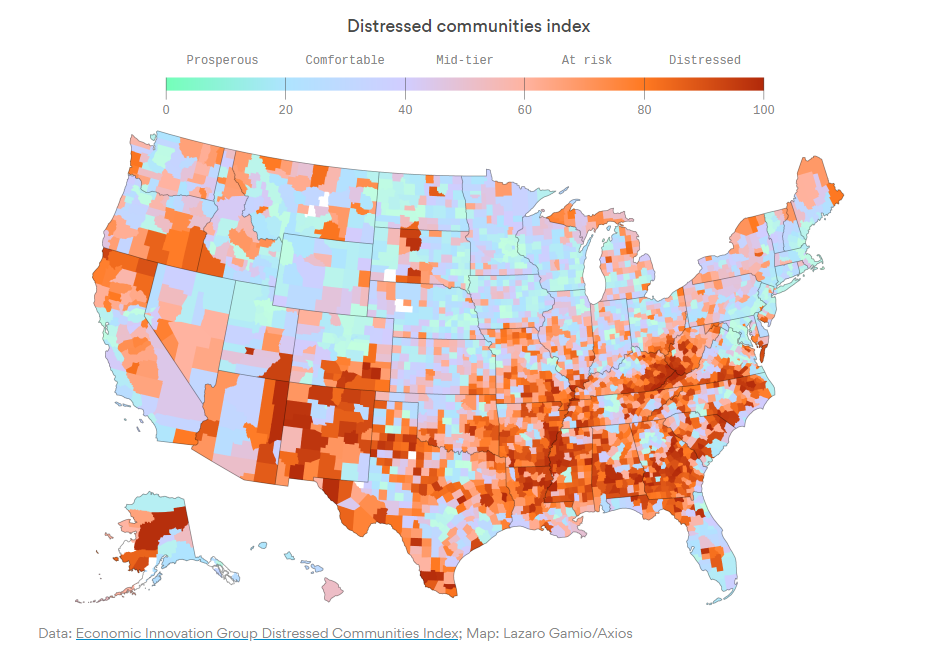 The Economic Innovation Group has produced their annual county-by-county report and the analysis concludes that economic success is most often tied to location. Here are some of the highlights (lowlights):

The most Prosperous category is also the largest with regard to the percentage of the population. The 84.4 million Americans that live in prosperous communities account for 27% of the U.S. population. “From 2011 to 2015, the U.S. added 10.7 million jobs and 310,000 businesses and establishments, yet growth was limited to the top echelon of U.S. zip codes. According to the DCI, ’85 percent of prosperous zip codes saw rising numbers of business establishments and 88 percent registered job growth.'”

Given the significant gap between Prosperous and Distressed communities is it any wonder that many Americans are suffering? As was reported earlier this year, the U.S. has suffered consecutive drops in life expectancy for the first time since the early 1960s (1962-63). On average, Americans can expect to live for 78.6 years, which is a full 1.5 years less than the average for developed countries.

It is great that many Americans are prospering during the recovery from the GFC, but to claim that the U.S. is humming on all cylinders is a great injustice to many of our fellow citizens who have yet to benefit, and may never.