Anyone who knows me knows that I spend most of my time focused on issues related to the retirement industry.  However, every once in a while something will pop up that I need to focus on and bring to your attention.  Here is one of those important items!

In my capacity as a member of the Midland Park Borough Council, I was invited to attend an event at the town’s 911 Memorial where U.S. Representatives Michael G. Fitzpatrick (R, PA) and Josh Gottheimer (D, NJ) were speaking about H.R.911, the Saracini Aviation Safety Act of 2015. This Act is named for Victor Saracini, United Airlines pilot of doomed flight 175. His wife, Ellen (pictured below), has been championing for improved safety and security on flight decks since the horrors of 9/11/01. 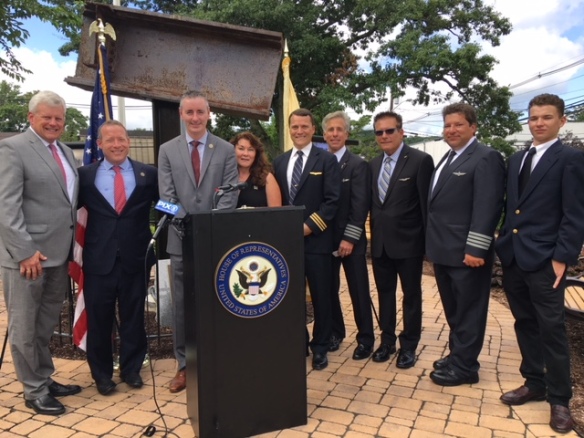 Furthermore, a “covered aircraft” is a commercial aircraft: (1) equipped with more than 75 passenger seats, and (2) with a maximum gross takeoff weight of more than 75,000 pounds.

As I heard this morning, this is not a partisan piece of legislation, as nearly 90 Congressmen and more than 10 Senators, both Democrat and Republican, have co-sponsored this legislation. It is legislation designed to protect the flying public, as well as airline personnel. Most of us in the retirement industry travel a lot each year. I happened to be flying on the morning of 9/11, but was fortunate to be flying south from Newark to Atlanta. Obviously, many others weren’t as fortunate.

There has been recent movement to require these secondary safety doors to be installed on new planes. But, shouldn’t something be done to improve the security for the 1,000s of planes currently in operation? As the flying public, we should demand that Congress acts to pass this critical legislation and force the airline industry to invest a modest sum (<$5,000 / plane) to significantly reduce the likelihood that events of 9/11 are ever repeated. The substantial reduction in corporate tax rates should provide the airlines with the capital needed to make this enhancement.